It’s the year 2000 all over again, as Nokia steals the show at MWC by releasing a new version of their infamous phone – the 3310. All the other Android phone makerers were there – including LG, Huawei, Blackberry and Sony.

In other news, we’ve officially merged with a parallel universe as Suicide Squad takes home an Oscar. Or did they? Find out on episode 87 of The Lazy Couch podcast.

The Lazy Couch is a geek culture podcast hosted by Kelvin Lee and Geoff Kim, based out of Sydney Australia. Topics range from the latest trends in technology to comic book movies and all things geeky. If you enjoyed listening to us, you can help the show by leaving us a review on iTunes or get in touch with us on @thelazycouch.

The intro music is ‘Helix Nebula’ by Anamanaguchi. 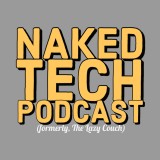 By The Naked Tech Podcast

This podcast is brought to you by Geoff Kim & Kelvin Lee - 2 geeks who chat about technology, pop culture and whatever disturbs The Force.

This site uses Akismet to reduce spam. Learn how your comment data is processed.